Key supporters and kinsmen of former President Goodluck Jonathan, at the weekend, endorsed the presidential candidate of the ruling All Progressives Congress (APC), Asiwaju Bola Ahmed Tinubu, ahead of the 2023 presidential election. 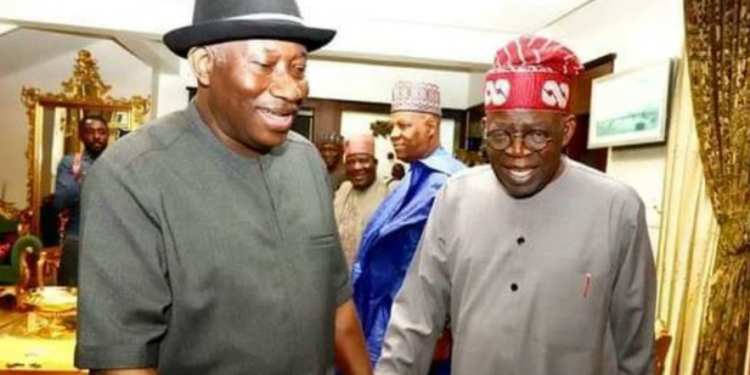 A Coalition of the ex-President’s supporters and kinsmen, who are members of Citizens Network For Peace and Development in Nigeria (CNPDN), said since Jonathan declined to join the 2023 presidential race, despite their consistent appeals, the right thing to do was to support the APC presidential candidate, who they said, has the structures and capacity to win the election.

Recall that earlier in the year, CNPDN was among the first Southern Coalition to openly urge former President Jonathan to run for office of President on the platform of the APC.

The Coalition had also involved prominent Southern leaders to prevail on Jonathan to join the race. Jonathan, who promised to consult widely, reneged at the last minute, paving the way for Tinubu to emerge the presidential candidate of APC.

National secretary of the Coalition, Mr. Francis Okereke Wainwei, who hails from Bayelsa State, while briefing journalists at the weekend, said as patriotic citizens, they can’t sit back and not participate in the electoral process of the country.

Wainwei noted that “as patriotic citizens under the auspices of the Citizens Network For Peace and Development in Nigeria, we took it up as a burning need for us to be actively involved in the process leading to the election of Nigeria’s next president,who shall be taking over from President Muhammadu Buhari next year.

“We consider it as very important and necessary because Nigeria needs a truly visionary, competent and detribalized leader to enthrone a more united, peaceful and prosperous nation. As patriotic citizens we feel obliged to take some proactive measures to ensure that the right president is elected, come 2023 by providing proper information and guidance that will enable the electorate elect the right candidate as president.

“We therefore, took it upon ourselves to do thorough investigations, opinion sampling and interviewing of major stakeholders from across the country to know the exact mood of the nation ,to enable the electorate make the right choice for the 2023 presidential election.

“We also took into consideration the declarations of both the APC Northern Governors’ forum and that of the Southern Nigeria Governors’ forum ,with respect to which part of the country that should produce the next president in 2023.The both groups declared that power should shift to Southern Nigeria for the purpose of promoting equity, justice and fairness ,which they argued would strengthen the unity of the country.

“After a forensic analysis of the declarations and opinions of various groups and stakeholders across the country, we also came to the conclusion that for the peace, unity and progress of this country, a competent and experienced presidential candidate from Southern Nigeria be elected as president, come 2023.This is to strengthen the fragile unity we are experiencing at the moment, as a nation. It will appease some groups and individuals agitating against the political domination of others by any one part of the country.

“We hereby declare our total support for Bola Ahmed Tinubu, the APC Presidential candidate, as our preferred candidate for the office of President, Federal Republic of Nigeria, come 2023.

“We are, therefore, using this medium to also call on all patriotic Nigerians to support and vote massively for Bola Ahmed Tinubu as president in the 2023 presidential election ,as that is the best interest for Nigeria at the moment.

“Our choice of Bola Tinubu is strongly premised on his wealth of political experience, intellectual sagacity, a knack for identifying and recruiting competent people and the capacity to mobilize human and material resources for the accelerated and holistic development of the country.

“We believe strongly that the next president of this country should be someone who firmly believes in the philosophy of ‘building the people, to build the nation’; he should be a people-oriented president.

“Tinubu fits perfectly for the kind of president Nigeria needs in the next dispensation He has the capacity and the wealth of political experience to re-enact the Lagos State magic in both the economic and political stability of this country. He is a national patriot and a detribalized leader that has the visionary mindset to build a prosperous, strong, peaceful and united Nigeria.”